NGO Diplomacy is a timely and extremely important contribution to understanding what impact NGOs have had in intergovernmental negotiations especially in in the area of the environment and sustainable development. NGO Diplomacy zeroed in on the impact of NGOs on the intergovernmental processes and negotiation outcomes and enlightens understanding of how international negotiations are conducted and the roles NGOs have in these. 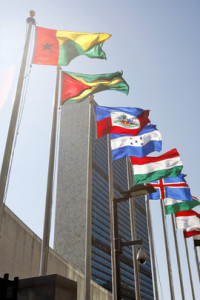 For those who have walked the UN corridors, as for Betsill and Corell, the measures of success of NGO diplomacy are not straightforward. Often the actual impact cannot so easily be proven by a paper trail. Like all diplomacy, and relationships for that matter, the influence of ideas or perceived benefits are fickle and nuanced if one wishes to measure them yet we all know the power of ideas and persuasion whatever their basis.

In short, NGOs can put pressure on governments to persuade them to change policies. But how this is done, where it is done and some of the surrounding and changing circumstances is what NGO Diplomacy looks at.

Betsill and Corell’s work outline how NGO diplomacy plays a significant role in intergovernmental negotiations drawing out distinctions between the ways governmental diplomats and NGO diplomats work and what they can represent. The benefits and the challenges of these two worlds interacting track back to their different boundaries. The states have national and political boundaries. NGOs ‘ boundaries more often transcend state boundaries and are de-marked by issues such as those that affect the global commons.

In particular, this study provides an analytical framework that is intriguing for those who seek to influence negotiators and the negotiation process. Because there are so many variables in the actual work done by both governments and NGOs, the editors acknowledge the difficulty of assessing all factors. However, there are basis for measuring NGO influence in particular cases and this is done using various methods and data types.

The reflections the editors made at the end of their work drew out many important and interesting points connected with political stakes, issues of NGO competitions and politics, alliances with states, perceived levels of contention, and finally the shifting and blurring of some elements of global governance and diplomacy.

Michele M. Betsill is Associate Professor in the Department of Political Science at Colorado State University.
Elisabeth Corell, the Wallenberg Fellow in Environment and Sustainability at the Swedish Institute of International Affairs from 2001 to 2006, is currently an independent scholar.