Have our own conceptions of the effectiveness of NGOs kept pace with global and technological changes to say nothing of the actual ability of NGOs to effect significant change? Is the trend toward government funding of NGOs helpful or problematic?

There are many reasons why one might think that NGOs have never been better equipped to advocate and campaign. Dedicated campaigning and fundraising departments; professional, qualified, experience and media-savvy staff now fill advocacy roles. And thanks to better and cheaper telecommunications, social media and the internet, even small, previously obscure charities are able to quickly access information, images, stories from the field, turn them into campaigns and connect with their audiences. This bureaucratized, expert, 24/7 globally linked machinery contrasts with the earlier, looser, slower, less ‘professionalized’ workings of the women’s movement, anti-slavery or anti-apartheid movements. But has this made today’s campaigners more effective? Is it all enough?

The world has changed since 1995 and the Beijing Women’s Conference to say nothing since the years of the anti-apartheid movements. The Secretary-General of the UN now frequently asserts the importance of the role of Civil Society even as global structures and their roles continue to shift and change—including that of the United Nations itself.

Professor Jude Howell, director of the Non-Governmental Public Action Research Programme at the London School of Economics sees there are some critical issues for NGOs to face today. First, since 9/11 the global war on terror has unsettled the everyday view of charities as benign, harmless, benevolent organizations.  Add to this the growing reliance of NGOs on government funding since the rather brutal economic crisis. And this spurs the natural competition. Listening to the early questions many NGOs new to the United Nations arena and it is clear that they too seek association with the UN’s Economic and Social Council at least in part, in the hope of finding new sources of funding either directly or indirectly as a result of their new level of acceptance.

To Professor Howell, this indicates the need for  some serious self-reflection about core issues of autonomy and positioning in the coming months and years.

… at what point does intense competition among NGOs for commercial or government funding risk compromising key values and agendas? To what extent does the scramble for resources pit one NGO against another rather than fashion solidarity and collective campaigning? And to what extent does this come at the expense of broader commitments to protect minorities and to defend the spaces of civil society? As co-producers of welfare, development and security, NGOs now have maybe more to lose. But in the long term, unless they face these raw challenges, their role as agents of emancipatory social transformation can only diminish. Indeed, their very relevance may be at stake. 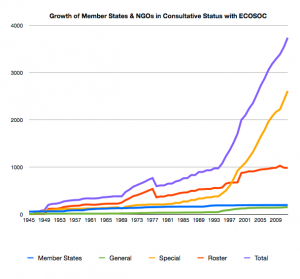 For NGOs active in advocacy at the United Nations, this self-reflection is also needed as the sheer number of NGOs in consultative status with ECOSOC continues to increase. To have a voice in the relevant chambers of the UN, more than ever before, NGOs need to find ways to work effectively in coalitions. Easily said yet challenging on many fronts. How to do this cost effectively and in ways that still enable each NGO to move their unique agenda forward. Many an NGO loses energy long before they make an impact.

For small NGOs this is even more relevant a challenge. Yet large NGOs wanting to increase their brand value also hesitate to coalesce unless they can “lead” the charge. And these discussions are rarely debated in NGO committees, coalitions and networking. Even the NGO tasked with representing the voice of NGOs at the UN, CoNGO is itself more focused on its own survival when wrestling with this issue may be the key to unlocking their current dilemma of relevancy.

Today, civil society relevance is not as simple an issue as “why don’t member states want our expert input?” Member states at the UN are themselves finding their scope of influence being naturally decreased by the globalization process and the increasing role of transnational organizations.

This is a conundrum that deserves more attention and more intentional debate amongst civil society and governmental organizations alike.