Is Child Pornography One Of Your Concerns? 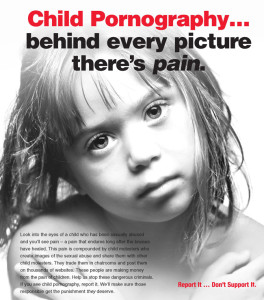 Neuroscience may not break new ground when it delves more deeply into our understanding of the harmful effects of exogenous (“real”) addictions such as alcohol, cocaine and even food. However, with similar results showing up in the case of “endogenous process addictions” such as pornography and other sexual addictions where, then things start to get even more interesting.

Obesity studies have demonstrated that multiple areas of volume loss in the brain, particularly in the frontal lobes, areas associated with judgment and control, similar to the results of cocaine and methamphetamine. Now there is growing evidence that compulsive sexuality can indeed be addictive, just as overeating can be.

Even more instructive are similar findings seen with the abuse of a normal biological behavior, eating, leading to addiction and obesity. In 2006, a VBM study was published looking specifically at obesity, and the results were very similar to the cocaine and methamphetamine studies.[20] The obesity study demonstrated multiple areas of volume loss, particularly in the frontal lobes, areas associated with judgment and control. This study is significant in demonstrating visible damage in a natural endogenous addiction, as opposed to an exogenous drug addiction. Furthermore, it is easy to accept intuitively because the effects of overeating can be seen in the obese person.

Eating, of course, is essential to individual survival, necessary for survival of the species. Another activity necessary for survival of the species is sex, an observation which leads to a series of logical questions derived from the work on obesity. Would the findings seen in eating addiction be seen in excessive sexual behavior? Can sex be addictive in the neurological sense? If so, are there associated with the addiction anatomical changes in the brain seen with other addictions?A recent study supports growing evidence that compulsive sexuality can indeed be addictive. In 2007, a VBM study out of Germany looked specifically at pedophilia, and demonstrated almost identical finding to the cocaine, methamphetamine, and obesity studies.[25] It concludes for the first time that a sexual compulsion can cause physical, anatomic change in the brain, the hallmark of brain addiction. A preliminary study showed frontal dysfunction specifically in patients unable to control their sexual behavior.[16] This study used diffusion MRI to evaluate function of nerve transmission through white matter. It demonstrated abnormality in the superior frontal region, an area associated with compulsivity(Hilton & Watts, 2011).

Donald L. Hilton, Jr and Clark Watts from the University of Texas make a plea for further studies of the potentially devastating biological and neurological effects of pornography objectively, on the grounds that concern is legitimate and cannot be reduced to mere religious or moralistic reactions.

The sex industry has successfully characterized any objection to pornography as being from the religious/moral perspective; they then dismiss these objections as First Amendment infringements. If pornography addiction is viewed objectively, evidence indicates that it does indeed cause harm in humans with regard to pair-bonding.[2] The correlation (85%) between viewing child pornography and participating in actual sexual relations with children was demonstrated by Bourke and Hernandez.[4] The difficulty in objective peer-reviewed discussion of this topic is again illustrated by the attempted suppression of this data on social grounds.[15] The recent meta-analysis by Hald et al. strongly supports and clarifies previous data demonstrating correlation with regard to pornography inducing violence attitudes against women.[10] With such strong correlative data, it is irresponsible not to address the likely possibility of causation in these regards. Reviewing this data in the context of current usage patterns is particularly concerning; 87% of college age men view pornography, 50% weekly and 20 daily or every other day, with 31% of women viewing as well.[5] The predictive effect of pornography on sexual behavior in adolescents has also been demonstrated (Hilton & Watts, 2011)

For those active in the  fight against trafficking and child pornography, you might add public health concerns to your advocacy approach.