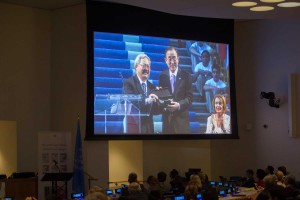 Broadcast of the UN Charter Commemoration Ceremony at the City Hall Rotunda in San Francisco with simultaneous transmission to New York.

The Secretary-General Ban Ki-moon receives the key of the City from Edwin M. Lee, Mayor of the City of San Francisco.

This special event was part of the celebration of the 70th anniversary of the signing of the United Nations Charter in San Francisco on this day in 1945. The Secretary-General was joined at a public ceremony at City Hall by San Francisco Mayor Edwin Lee, California Governor Jerry Brown, Congresswomen Nancy Pelosi and an audience of local and international dignitaries, UN Officials, community members and students.